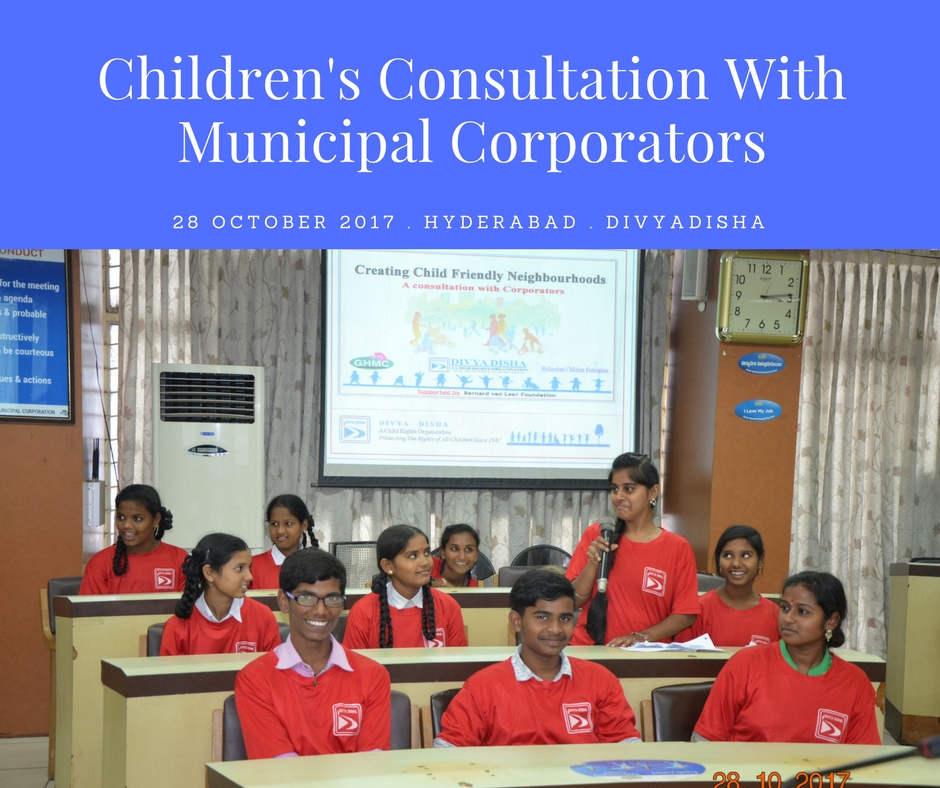 We have, with the support of the Bernard van Leer Foundation been working in urban slums of Hyderabad to create a platform for children to reflect on their experiences living in a city and discuss the city they need. The aim is to change the perception of the role of children in shaping the city. Through our work in the slums, and the training of child leaders and child journalists, we have been  creating awareness of the importance of their inclusion and contributing to inclusive, safe, and sustainable cities.

Children have been raising issues in their slums and approaching Government Officials and their local Corporators to have these resolved. To bring the children in touch with the Corporators at an official forum, the Children’s Consultation with Municipal Corporators was organized.

A Presentation By The Children

Child Leaders and Child Journalists made a presentation to the Deputy Mayor and the Municipal Corporators.

They shared about the formation of children’s organisations and and the work of the Child Leaders.  They explained the concept of the community wall paper (godapatrika) and how the Child Journalists raise issues through it. The children explained how they articulate their opinions on various issues in their community and write letters to the authorities get them resolved.

Additionally,  they explained the concept of MaBaMaPa – Maa Basthi, Maa Pranalika (Our Community, Our plan).  The children have formed Basthi (community) Children’s Councils. Through this children led planning for child friendly neighbourhoods, the children become the centre of community planning. The Chairperson of each Basthi Council is the Greater Hyderabad Municipal Corporation (GHMC)  Corporator for that area. This way, the process is mainstreamed and systematized.

This consultation was planned to bring together the Corporators who have been involved in these processes. Since the Deputy Mayor is also one of the Corporators who we work with, he generously agreed to host the meeting in the Greater Hyderabad Municipal Headquarters.

Key Recommendations Made By The Children 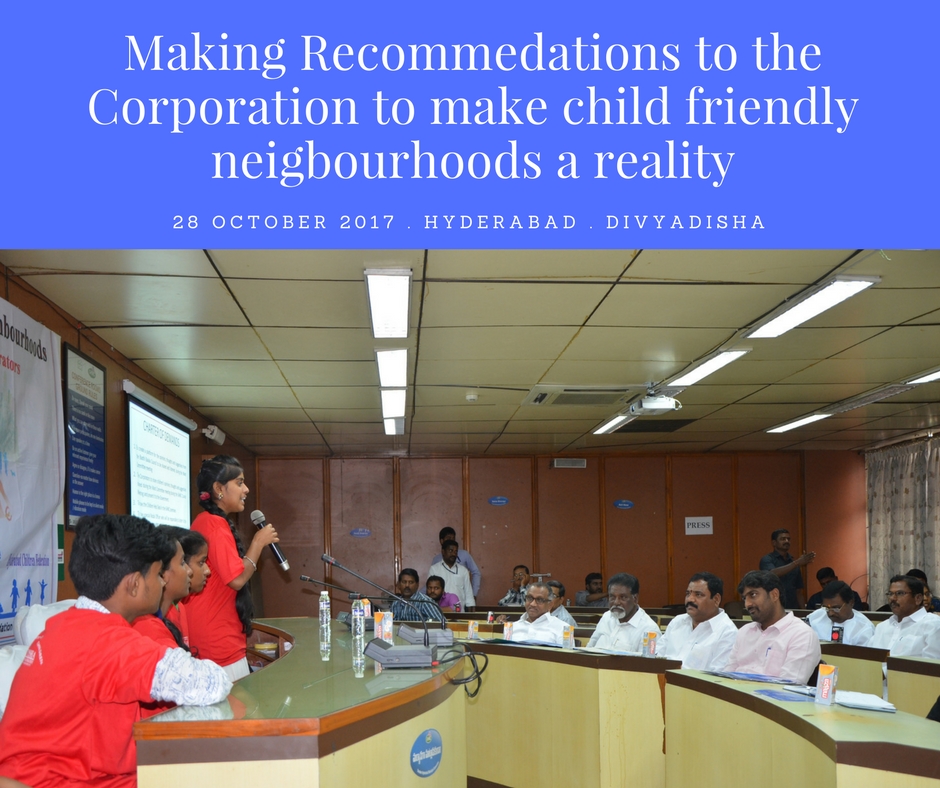 Post the presentation, the children made some key recommendations:

# 1 – Set up a Help Desk in the GHMC Headquarters

The children shared that they, through the training received through Divya Disha, know how to write letters and have access to their Corporators and the GHMC Officials. However, this is not so for all children in the city. Therefore, they recommended that a Help Desk for Children be set up at the Corporation Headquarters.  The Help Desk will receive, forward and follow up on the complaints and suggestions that come from children, either by phone, post, letter or in person. This will create access for the children to the highest city authority.

# 2 – Appointment of a Nodal Officer for Children’s Issues

To strengthen the Help Desk and make sure that the children’s complaints and issues are redressed, a Nodal Officer should be specifically appointed for this.

The GHMC conducts ‘Prajavani’, the weekly grievance redressal programme, in which citizens can interact with senior officials in a systematized manner.   A similar channel of interaction, Balala Vani, for children, was proposed. 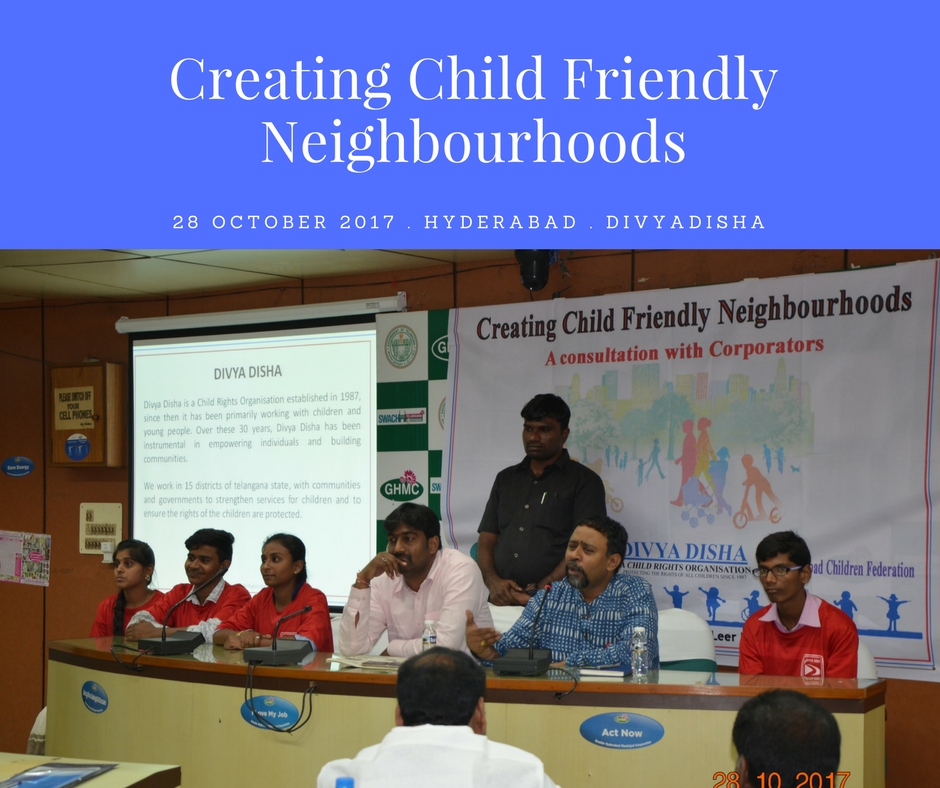 There was a verbal commitment from the Corporators  to take these recommendations forward and discuss them with the Mayor and the Municipal Commissioner. 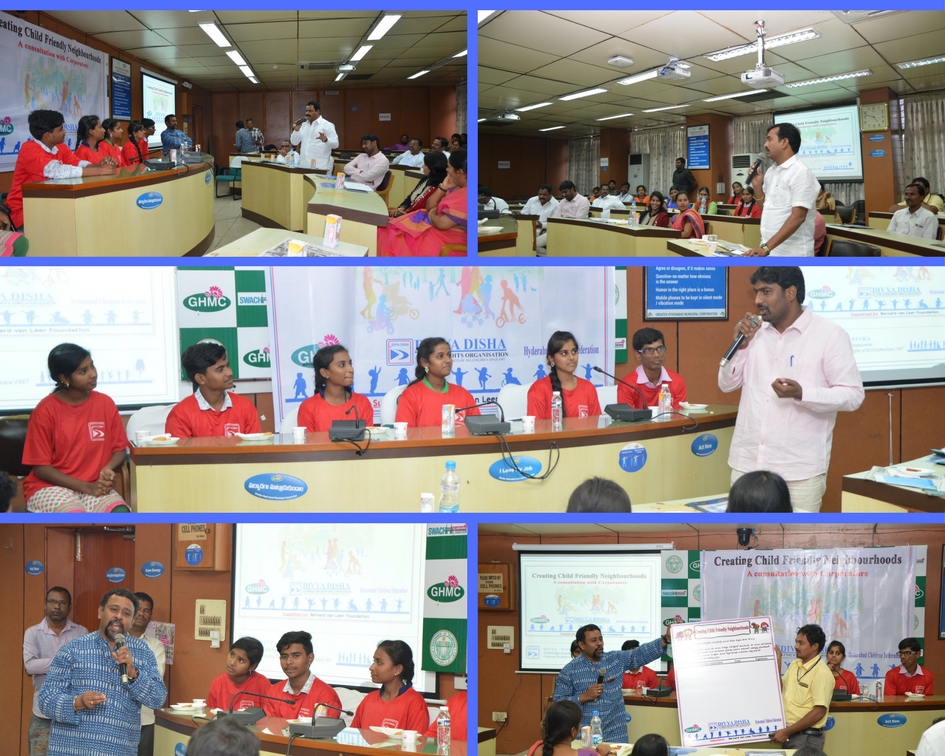 Interactions Between the Children And The Corporators

It was hard to miss the symbolism of children occupying the dais of in the heart of the Municipal Corporation, while the Corporators sat and listen, and stood up to speak in turns.

The Corporators signed a written pledge to have a child friendly perspective in all their decisions. The pledged to listen and take on board the voices of children both as Corporators and as Chairpersons of the Basthi Committees. This pledge was symbolically handed over by the Corporators to the children.

One thought on “Children’s Consultation With GHMC Corporators #childfriendlycities #Urban95”