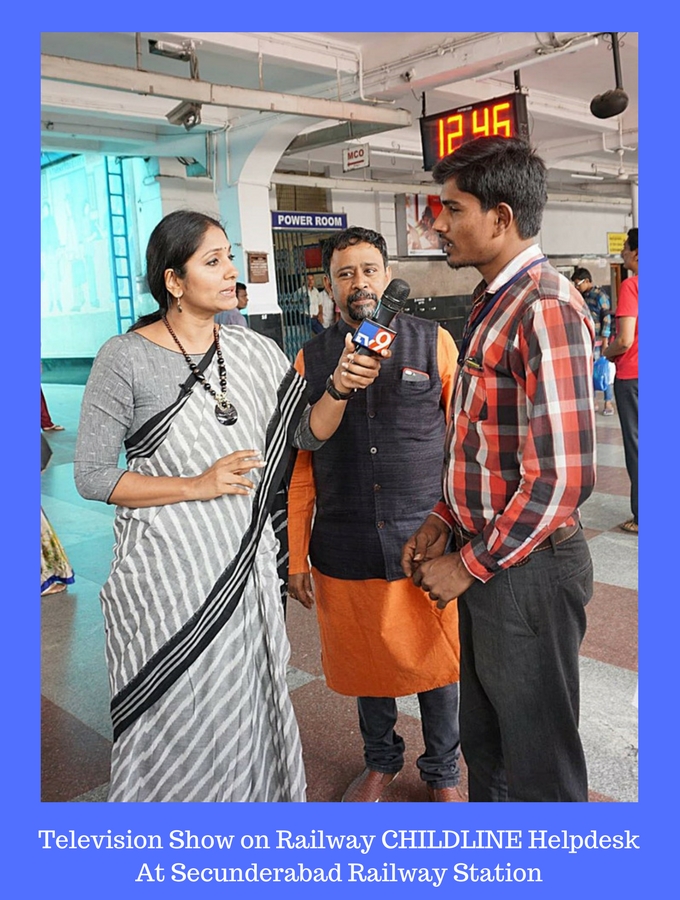 In 1994, UNICEF estimated that 11 million street children live in India, and most of these children are living at and around Railway Stations.  These children are  abandoned,  homeless or have run away from their homes. They travel to different parts of the country through trains and use the Railway Station premises for shelter and livelihood. The moment they arrive on the platform they are vulnerable to all forms of abuse, violence, neglect and exploitation. Without much support, their vulnerability puts them at risk from various forms of abuse, health issues and they are deprived of their childhood. Recently TV 9’s programme Naveena had a television show on Railway CHILDLINE Help Desk at Secunderabad Railway Station which is run by Divya Disha. 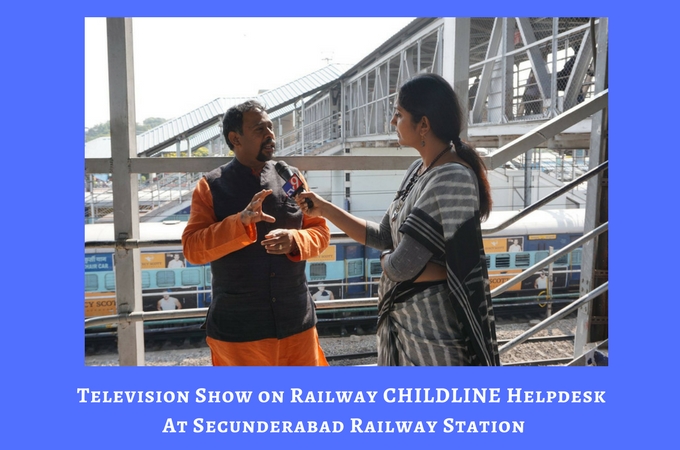 The programme focused on the issue of runaway children and the menace of child trafficking and child prostitution rings. The interventions to create awareness and the monitoring by the CHILDLINE team and the involvement of Railway authorities and Railway Police was shared.

Children who run away from home prefer to use trains as there is more anonymity than the buses and other forms of transport. In order to ensure that these children don’t fall into the clutches of brokers and traffickers, the Help Desk staff actively conducts awareness programmes. The aim of the awareness is to create a network of passengers, porters, cleaners, vendors, transport operators, Police and Railway personnel to protect vulnerable children.

Railway stations and bus depots are very important transit points at which children should be rescued during the ‘golden period’ of 24-48 hours after arrival. If children are rescued before that their future is protected. After that, they are most vulnerable to traffickers, drugs peddlers and other evil forces. –  Isidore Phillips, Director, Divya Disha

Mr Phillips shared how the Divya Disha Railway Childline staff is trained to identify runaway children from their appearance and behaviour.  Staff constantly move about the station and are particularly vigilant during the arrival of certain trains. They  also have access to the CCTV monitors to watch out for children.When adults are seen travelling with groups of children, staff are vigilant to see that these children are not victims of child labour brokers. With the help of the Railway Police suspicious looking individuals are detained for questioning.

He also cautioned that many people who find children feel they can help by taking them to their homes. Such children then end up becoming domestic workers. He appealed to members of the public to instead call CHILDLINE’s Toll Free #1098 and let the children be taken care of by the system.

The TV Anchor, Jhansi, interviewed Divya Disha staff, porters, cleaners, vendors and showcased how they have been sensitized to the issue of runaway children and are aware of how they need to report this to the Help Desk. She also interviewed Police officials of the Railway Protection Force (RPF) and the Government Railway Police (GRP) to give viewers an insight into the Railway Police’s role in child rescue and protection.

Divya Disha’s CHILDLINE Help Desk provides temporary transit care and protection to a child found on the railway premises or inside trains by RPF, Government Railway Police, railway employee, or any other public or public minded citizen.

The Help Desk is manned round the clock by our staff. Care and protection is provided to the rescued child till the child is produced before Child Welfare Committee as per the provisions of Juvenile Justice Act.

You can watch the show here or on our YouTube channel.