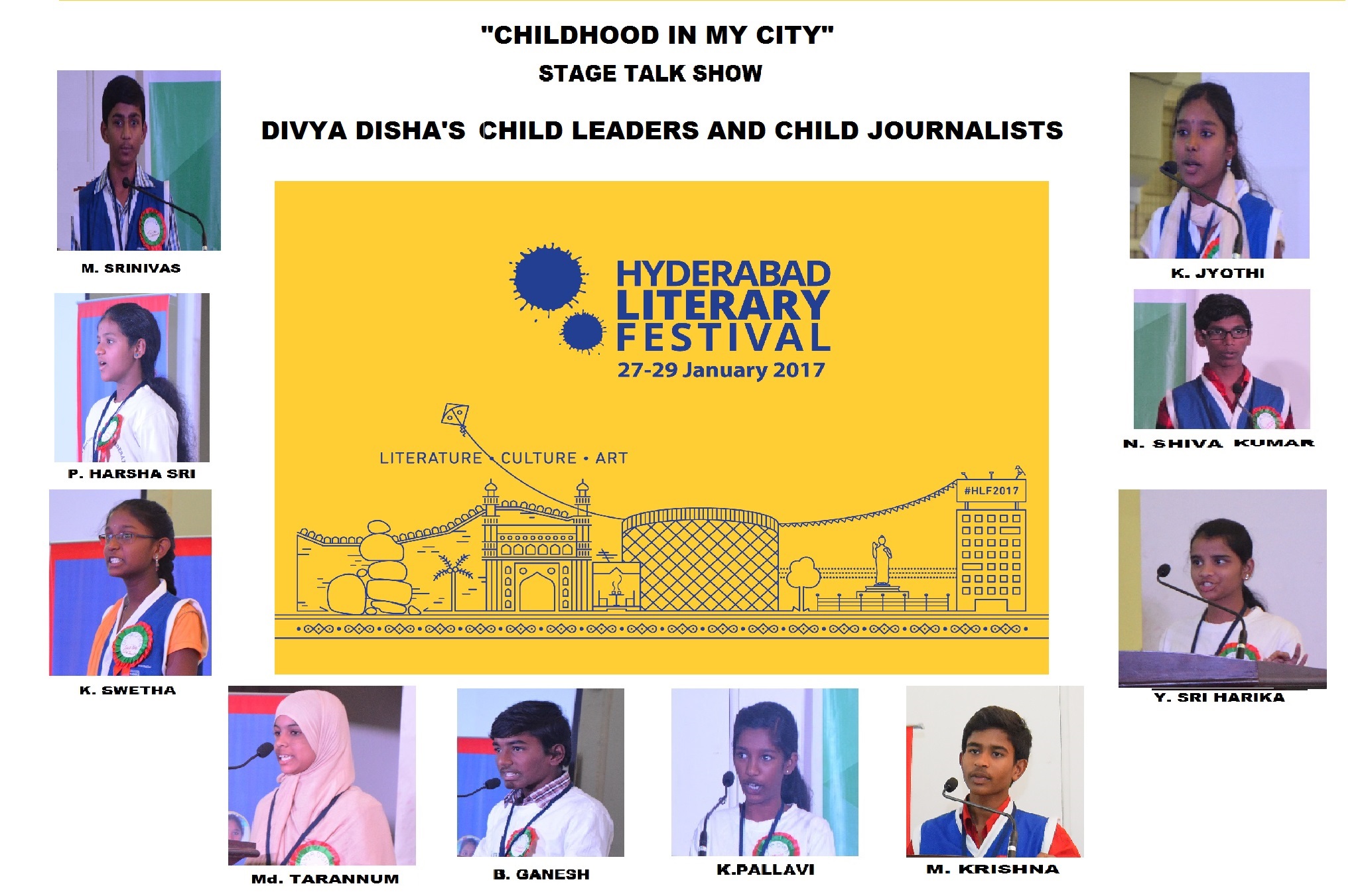 Divya Disha is proud to have its Child Leaders and Child Journalists participate in the Hyderabad Literary Festival from 27 – 29 January, 2017

Ten Child Leaders and Child Journalists participated in the stage talk show, Childhood In My City,  held at Goethe-Zentrum on 27 January.

The talk show was moderated by Jyothi, a Child Leader and since the children spoke in Telugu, Mr Isidore Phillips, Director, Divya Disha, translated into English for the audience.

In the first part of the session children shared their experiences of living in the urban slums. They highlighted the lack of basic facilities.

Jyothi shared how even though  30% of the population in India is below the age of 18 years, their views are never considered in the designing of facilities.

Srinivas  who lives in a slum on a hill in Film Nagar, shared how children climb 200 steps which are uneven and filled with sand in places, have rodents and are slippery with drainage overflowing ,to reach basic facilities. He pointed out that he has to climb these stairs almost 3 times a day to go to his school and for tuition. As a student of Class X he finds it difficult, how much more tiring for the younger children.

Swetha talked about the condition of roads in the slums. Being narrow,  basic emergency services like ambulance cannot come into the slum. More importantly, the roads run right in front of their homes, and are used as an extension of their homes, for parking space for vehicles and for playing!

Sriharika highlighted the problems that they face with housing. She shared how most houses in the slums have  only one room,  in which they study, sleep, cook. There is no proper ventilation within the house and no fresh air outside either. She raised the issue of toilets. Some houses in the slums don’t have them. Those most affected by this are women and young girls, as open defecation leads to issues of safety, not to mention lack of privacy. Some houses have shared toilets. The few houses that have an attached toilet don’t have doors – a curtain separates the toilet from the other room.

Pallavi spoke of the problem of sanitation in her slum. Her slum community consists of rag pickers, who collect the waste from other localities and segregate it there. This is dumped in the open spaces available in the slum, exposing children to all sorts of health problems. 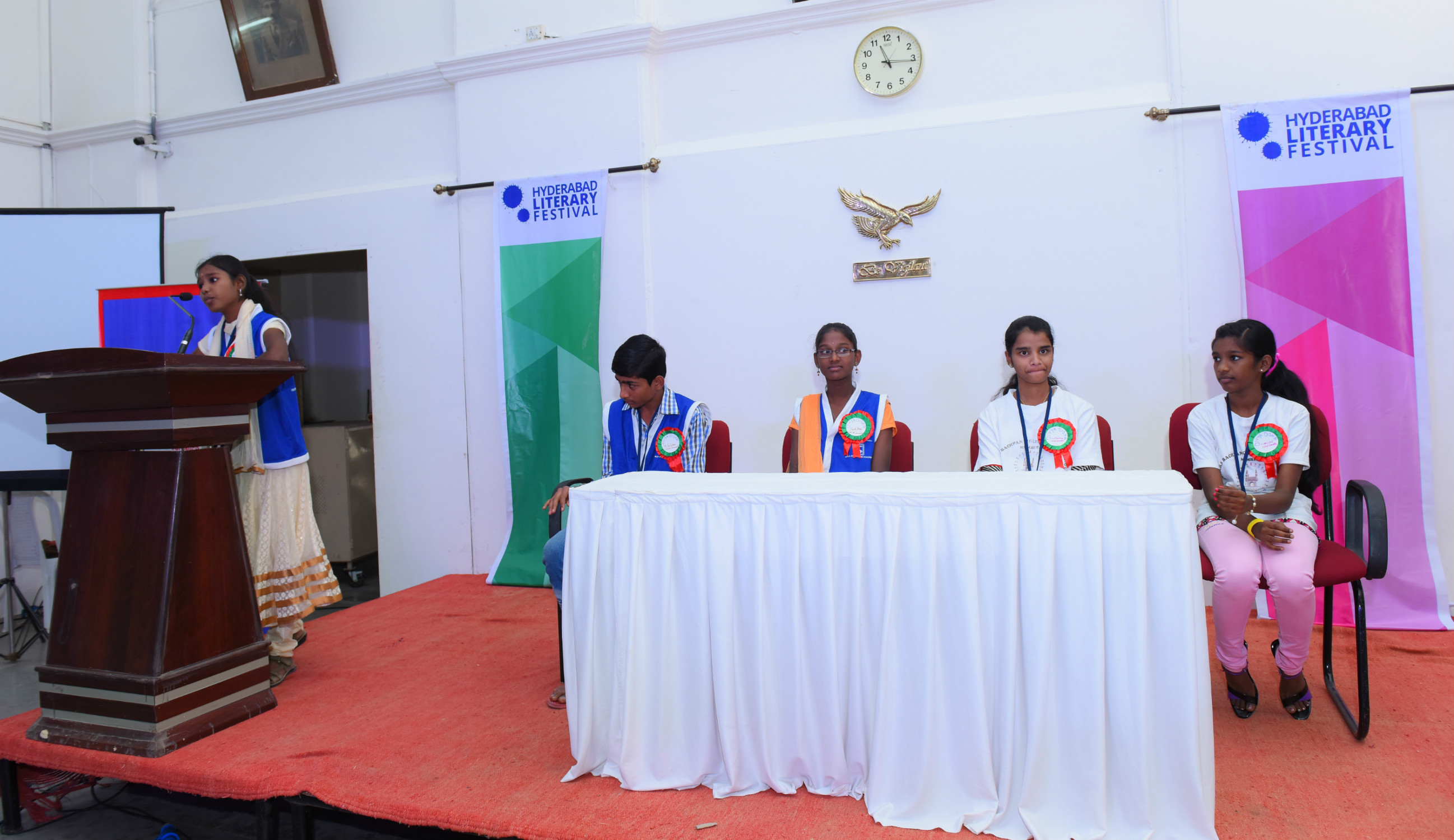 In the second part of the session the achievements of Child Journalists were shared.

The audience was shown the following video showcasing the work of Child Journalists   in identifying issues in their slums, highlighting them to the community members, and approaching the service providers, especially GHMC officials, and the success they’ve enjoyed.

In the third part of the session, the achievements by the Children’s organizations in the slums were shared.

Krishna shared one of the achievements in child journalists in his slum. An open drain in the slum was exposing children to all sorts of illnesses. The children decided to take up this issue and wrote a letter to the GHMC (Greater Hyderabad Municipal Corporation). When they did not respond, the Children’s Organization  took support from the mothers group in the slum and approached the GHMC. They responded and sanctioned the construction of a concrete slab on the open drain.

Harsha Sri  spoke of how the Children’s Organization in her slum identified and resolved the problem of drinking water supply. The drinking water supply was very erratic and residents had to store water for a long time.  The Children’s Organizations wrote a letter to the Cantonment Board member. Initially, she did not respond.  The children met her more than 3 times, before she visited the slum and understood the drinking water issue and resolved it. They now get water once in 3 days.

Tarannum shared how the lack of proper street lighting resulted in her sister, who was playing after dark, meeting with an accident. This was a common problem in her slum.   The children raised this issue and wrote a letter to the Electricity Department. They followed up on this for more than 3 months, but there was no response. They then decided to approach the Deputy Mayor of Hyderabad about this issue. They met him, and invited him to their slum. Immediately after his visit, street lights were sanctioned in their slum.

In the fourth part of the stage talk, the children spoke of their dreams and expectations for a child friendly city

Shiva Kumar  shared the dreams of children to have a child friendly neighbourhood. It starts with having a safe house – with electric points out of children’s reach and safe flooring; a separate study room for children. Clean surroundings, plants and trees around the house, broad roads with speed breakers and safe, open areas for children to play.

Ganesh  spoke of the need for public toilets, for regular garbage disposal and for better street lighting and road safety. 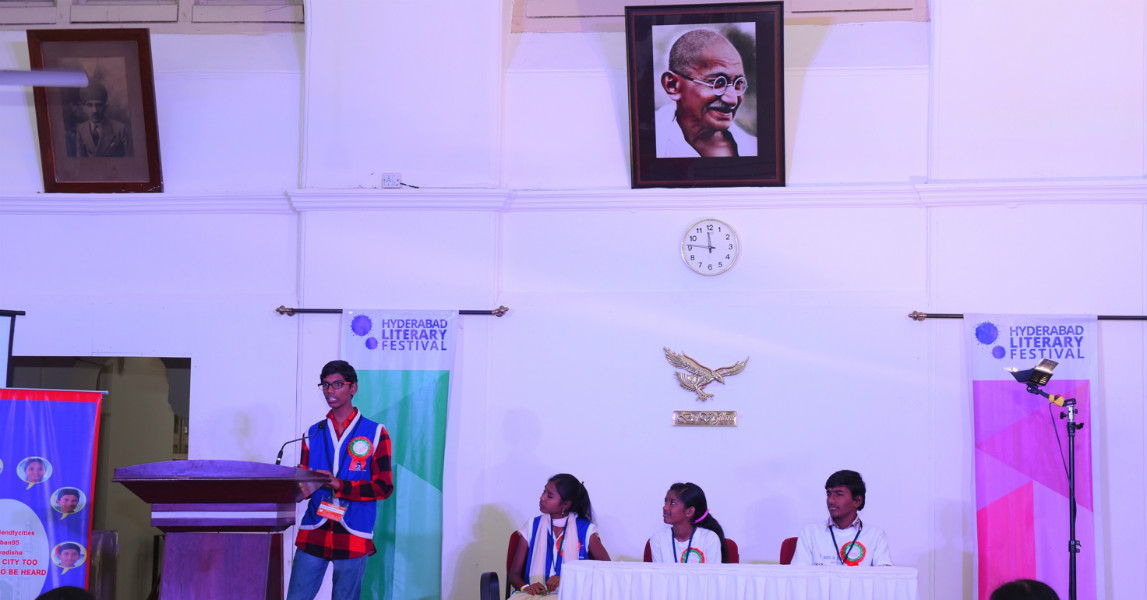 The audience comprised of visitors and participants of the Hyderabad Literary Festival as well as the Press and Media representatives.