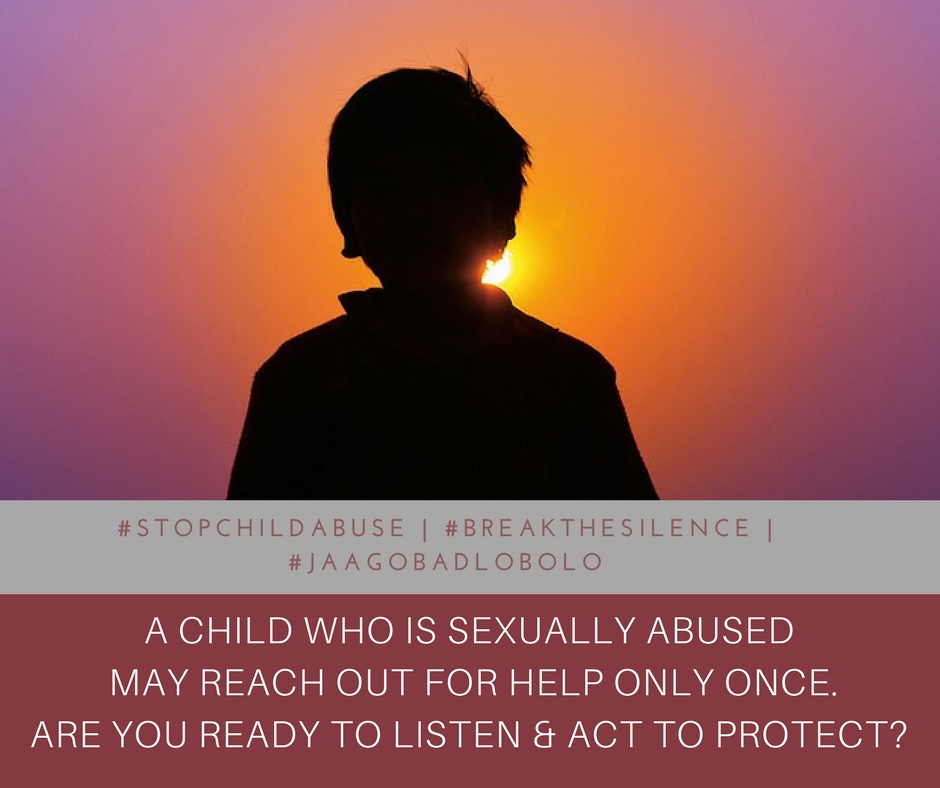 A child who is sexually abused may reach out for help only once. Are you ready to listen and act to prevent? Break the silence. Act to stop child abuse.

She was found sobbing on the railway platform by our CHILDLINE staff. A class 5 student of a private school, Kamala (name changed to protect her identity) had run away from home. When we tried talking to her, she refused to respond. She kept sobbing, refusing to eat or drink. It was only after several hours of being with her and offering to listen to her that Kamala told us her story.

One night, her father came drunk into her room. He tried to touch her and fondle her. She felt very uncomfortable and pushed him away. He fell down and went to sleep.

It happened again. Then again.

Kamala told her mother of this. Her mother said, “He was drunk and didn’t know what he was doing.”

It continued. He began to attempt to lie on top of her. The intensity of the abuse started to increase.

Both times, the adults cursed the father, but did not intervene on behalf of Kamala.

Kamala decided to protect herself. She stopped brushing her teeth and having a bath. She hoped that the bad body odour would keep her father away.

But that didn’t work either. Her mother, grandmother and brothers refused to act to protect her.

Having failed to get any help, and giving up hope, Kamala ran away from home. It was then that she was providentially found by our Staff.

A child who is sexually abused may reach out for help only once. Are you ready to act to protect?Click To Tweet

When she went home for her holidays, her father tried to molest her again. She fought him off.

Ameena noticed that her father was constantly shadowing her younger sister, Sabiha (name changed to protect her identity).

When she managed to get her sister alone, Ameena asked her about this. Sabiha confided that their father was attempting to touch and molest her too.

Ameena and Sabiha confided in a teacher they knew, who in turn contacted Divya Disha.

The most tragic outcome of this? The mother chose security over her daughters saying, “If my husband goes to jail, who will provide for our family?”

The family then ensured that no police case was booked.

The only saving grace is that Ameena convinced her family to send Sabiha to the hostel with her.

When a home, school or public space become unsafe for a child to whom should s/he turn?Click To Tweet

We must understand safety from the point of view of a child.

Jaago Badlo Bolo, a year long campaign against Child Sexual Abuse that the Telangana Police has launched is a good step in this direction. It challenges notions of safety.

It is important that the Police, as the  protector of the population in our State, takes charges to ensure that children are safe and facilitate safe childhood for all.

Divya Disha welcomes this move. As always, we will continue to collaborate with the Telangana Police to make the police force child-friendly and make safe childhood a reality for all children.